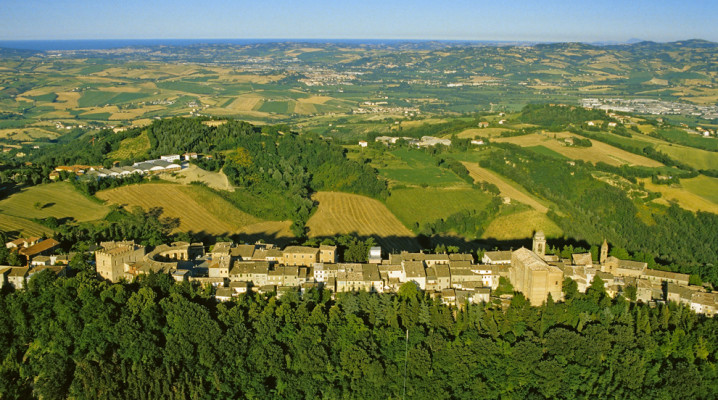 on March 12 | in Places | by Paolo Brancalion | with No Comments

Mondaino. We want to describe it as a round, enchanting, green and musical place.

Round, as its square. Enchanting, as the generosity ad warm welcome that its people offer to foreigners. Green, as the countryside that surrounds the village. Musical, as the town band, the Mondaino Young Orchestra (MYO) and the Galanti Brothers Accordion Factory.

Approaching the village, we imagine its down-to-earth quality. We meet the faces of the customers of the café outside the walls and observe the row of small and lively shops on the road leading to the archway that marks the entrance to the centre of the village itself.

We are not in a secluded place but it’s as if we had entered a different time zone; in a time when only the necessary exists, and when it is very obvious that the superfluous can easily be forgotten. We are at twenty km from the Adriatic and from Riccione, in the Conca Valley, at the borders between the region of Romagna and that of Marche. Here, in their expansion towards the Po Valley, the Etruscans overlapped with the Umbrian population. Afterwards, it was the turn of the Romans to try and stop the invasion of the Gauls.
The myths about the origins of the village are connected to the figure of Diana, the goddess of the hunt and of the forests, but also to the moon and to witches. More simply the name of the village, Mondaino, meaning “monte dei daini” (deer mountain) refers to the deer that can still be found in the hills of this area.

Walking past the “Porta Marina” archway, we reach the square, Piazza Maggiore, and find ourselves in one of the most interesting structures of the nineteenth century in the whole area of the province of Rimini. Its semicircular shape, encompassed by the neoclassical portico, was conceived by talented architect Cosci. The village’s main road begins within the square’s rounded space that the inhabitants affectionately call “piazza padella” (fry 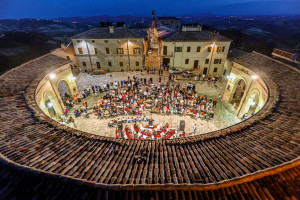 ing pan square). The life of the whole village converges here: small talk and important decisions, celebrations, feasts, hospitality and exchanges. Overlooking the square, Mondaino’s castle, the Rocca Malatestiana, firmly standing on sloping walls and topped with Ghibelline swallow-tailed merlons, with a breath-taking view on top and secret passageways in its foundations. Originally the surrounding walls had 13 fortified towers, and that’s what made Federico da Montefeltro describe it as a “solid and important place that under no circumstances could be conquered”.

Within the castle we find the Town Hall, the library and the paleontological museum, with an important collection of fossils, prehistoric remains of flora and fauna that are impressed and engraved in the friable layers of the locally found four-million-year-old sedimentary rocks. On the top floor, in the Durantino hall, we find the fresco of Madonna del Latte. Along the staircase we can see a precious collection of Renaissance maiolica. Inside the Portaia tower there is an accurate historical reconstruction of a guardhouse. All the furnishing, ornaments and weapons were made by skilled craftsmen, selected throughout Europe: by resorting to the historical records and iconographical sources, they managed to recreate the likely atmosphere of the half of the fifteenth century.
This is because the inhabitants of Mondaino consider studying, valuing and sustaining their traditions and origins of vital importance.

Piazza d’incontro, a workshop for the production and sale of ceramic art, placed at the village’s entrance, is a glaring example of this, just as the mosaic and restoration workshops. Last but not least, the project of the Arts and Crafts Children Workshops, which sees the participation of the Arboreto, of the local administration, the Museum, the craftsmen and the entire community, in an alliance aiming to preserve our roots, history and traditions and to connect them to our future. 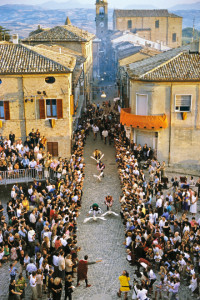 Along the village’s main road there is the church of San Michele Arcangelo, a spacious and beautiful building, erected on the site where supposedly the ancient temple dedicated to Diana once stood.

Just a few steps forward and we can have a glimpse at the Convent of the Poor Clares, a charming complex with a mix of buildings from different eras and a beautiful inner garden.
Crossing Porta Montanara the visitors step out of the old town centre, leaving behind not only its monuments but also the welcoming inns with tasty foods and exquisite wines in their menus. Reaching the hill of Formosino, we meet the Convent of San Francesco, where, in 1459 the peace agreement between the Malatesta and Montefeltro families was signed. From that day onward, Mondaino has also become the village of agreements, a place where you can find the tranquillity that is necessary to conclude important agreements or more simply for a sincere dialogue.