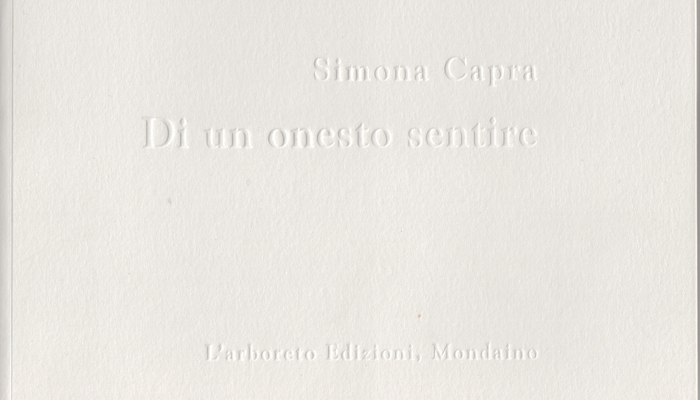 Simona’s tales, written in the early 2000s, were inspired by marginal reported events or by personal experience. The expository architecture is identical. Each tale is divided in three short narrative moments, all contributing to the definition of the theme chosen by the author.

“What strikes us of Simona’s reflections is their flow; a spiral developing from its centre and opening outwards. On the contrary, the apparent direction of her narration could deceive us, into an illusory promise of a vanishing point, of a perspective reduction of the premises, of a semantic confluence. We proceed step by step with her, in a constant circular gait. The thoughts are nearly becoming objects, we brush against them – we can nearly touch them; but there’s kind of a quiet tone that is extremely elegant, nearly nonchalant – without thorns, without suspicion – that distracts us, and we find ourselves one step farther than expected, where there’s no more waiting, where everything is as if accomplished, off balance on a tiny border that just barely reveals the abyss (even more terrible if it shines through the humble and meek, nearly pacified mood: an existential oxymoron). She’s light, utterly. It’s the lightness that blooms out of the deepest roots, out of hard and ancient stone foundations: a bloom of the soul, a faint aroma with a bitter aftertaste, everything slips away, the briskness of wind, beauty, alone, fleeting. But she fore-sees and feels, and maybe everything’s not lost. A heart-breaking trust, an inescapable and unshakable attachment to grace, to the wound of life, makes the author inseparable from her words, from her ‘tone’”. (From the book’s introduction, words by Letizia Bolognesi)

“The stories are set in an Italian provincial environment, in that sort of civic rarefaction that believes not to belong to History and not to make any. Everything appears of almost secondary importance, and despite the use of the present tense the event described by the thinking subject seems to affect her only marginally, almost as if indirectly, as if the narrator was reporting someone else’s experience, in a suspended and faraway time. Everything, actually, has already happened. Beyond repair. The elocution is calm with great attention to details. Uncertainty, incredulity and indignation are the prevailing emotions. The writing is clear, in a questioning key. It is swept by regret.” (From the book’s introduction, words by Roberto Barbanti)

Simona Capra (1971-2005), writer, academic, inventor of long-time projects between Ravenna, Rimini, Mondaino and Santarcangelo di Romagna. She worked with various cultural organizations and festivals among which Teatro degli Dei, Santarcangelo dei Teatri, Associazione Vaca, L’arboreto di Mondaino. She devoted most of her work as organizer and as artist to the associations of Rrose Sélavy and Pharos.

« One text and five lyrics about time Nobiltà e miseria »